This is a sample module published to the sidebar_top position, using the -sidebar module class suffix. There is also a sidebar_bottom position below the menu.
Login

This is a sample module published to the sidebar_bottom position, using the -sidebar module class suffix. There is also a sidebar_top position below the search.
Fall 2018 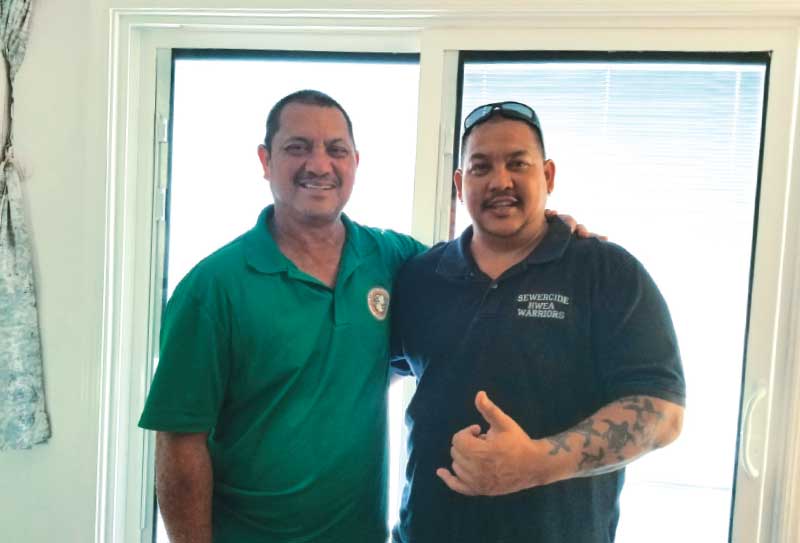 WEF Highlights Presents My Water Legacy Families
The Water Environment Federation (WEF; Alexandria, Va.) is bringing attention to the value of membership and tradition of working in the water sector.
The #MyWaterLegacy social media campaign and WEF Highlights articles feature the accomplishments and contributions of members who have passed down the tradition of actively participating in WEF and working in the water sector. WEF Legacy Families will appear in an ongoing WEF Highlights series. Read the series by searching for the keyword MyWaterLegacy.
Do you know of a family with multiple generations of WEF members and water sector professionals? Contact Jennifer Fulcher,
WEF Highlights editor, at jfulcher@wef.org.

Previously, we featured June and Bri Nakamura and then Sheryl and Alison Nojima. Here is our next installment which we hope to follow with more legacy stories. Herman II (left) inspired his son Herman III (right) by working hard, having a good work ethic and treating people with kindness and respect.

Herman Ellis II started working for the wastewater department on 3/11/1983 as a Wastewater Collection System Helper. Over the years, he has progressed and held six other positions within the department to where he is currently the General Forman overseeing operations in the Collection Systems Maintenance department. Prior to working for the City, Herman II had worked in the construction industry, which was good, but he always worried about layoffs. Herman wanted a secure job to support his young family, so he took the call and went to the City. His motivation has been: “If you are going to be in the business, be the best you can be.”

The senior Ellis noted that joining
WEF/HWEA was part of the job and an important connection to the industry. He has found it valuable for exposure to new technology and equipment and to hear about how he could make a difference in protecting the environment.

Herman II says that it feels great that his son as followed him into the wastewater industry. He especially likes to hear about his son’s goals and dedication and vision. He provides encouragement but did not suggest or push him into this field. Herman is very proud of his son and how he has progressed through the ranks, attaining his grade 4 operator license and becoming a supervisor in T&D at Sand Island WWTP. Herman is especially proud when co-workers mention that his son is a good worker who will make a good supervisor.

Herman Ellis III started with the city at the Wahiawa WWTP in 2007. There were five operators, two truck drivers, one supervisor, another plant worker and Herman. He must have made a good impression because they started training and mentoring him and then suggested that he apply for an opening for assistant operator. Herman’s fellow workers at the Wahiawa plant told him about how working in wastewater for the City allowed them to buy a house and send their kids to college. This sounded good to a 28 year old. Herman with a young family. He applied for the position and started as an assistant operator at the Sand Island WWTP. Over the next seven years, Herman III was able to get grade one through four operator certificates and had the opportunity to train as a Plant Supervisor. On January 15, 2018, Herman III was promoted to Wastewater Supervisor IV at the Sand Island WWTP.

The junior Ellis says that his father inspired him to work hard, to do everything to the best of his ability, to not do anything half-way, and to be respectful. Herman III is grateful to his parents, the HWEA ohana, and all the people who trained, mentored and supported him on his journey in the wastewater industry.

Herman says that WEF/HWEA allowed him to see new and evolving technology and equipment that is more efficient, more operator friendly, and more easily maintained. He enjoys the HWEA conference and the chance to learn new things there. He also found WEFTEC 2014 in New Orleans to be an eye-opening experience. He also got the chance to compete in the Operations Challenge at HWEA and at WEFTEC, which he credits with expanded his horizons.