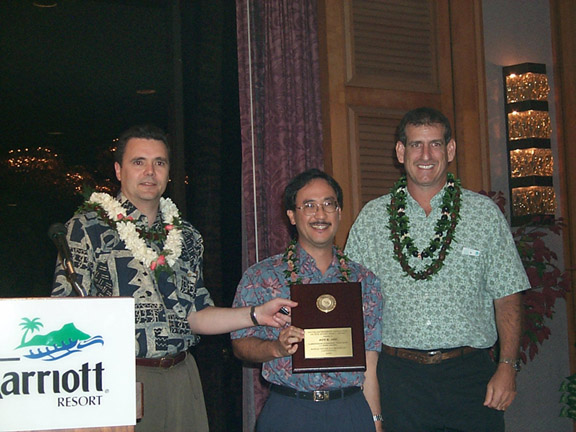 The Bedell Award was established by WEF to acknowledge extraordinary personal service to a member association (i.e., HWEA). Criteria for this award include organizational leadership, administrative service, membership activity, stimulation of technical functions, or similar participation.

The 2000-2001 recipient of the Arthur Sidney Bedell award is Roy K. Abe, who is currently a Vice President at the consulting engineering company, Hawai‘i Pacific Engineers. Roy was born in Honolulu and graduated from Kaimuki High School in 1975. After high school, Roy attended the University of Hawai‘i at Manoa, where in 1979 he earned a Bachelor of Science degree in Civil Engineering. He then attended graduate school and received a Master of Science degree in Sanitary Engineering from the University of California, Berkeley in 1980. Roy began his engineering career as a Project Engineer for M & E Pacific, where he was employed from 1980 to 1987. Along the way, he earned his P.E. license and from 1987 to present has been with Hawai‘i Pacific Engineers.

Roy and his wife of six years, Amy, reside in Kaneohe. Roy’s favorite foods include potato chips and chocolate. During his free time which is extremely limited, he attends UH Warrior football games. Some day he hopes to fly his radio controlled airplane which he built but has never had the time to actually fly. Roy’s favorite televison shows are now only shown as re-runs. These shows include Seinfeld and Home Improvement. His favorite musical group, the Beach Boys, is also in the re-run mode.

Roy has been an active member of HWEA for several years. His service to the Association includes:

Roy has received HWEA Service Awards in 1990-91, 1995-96 and 1997-1998 for his continued involvement in HWEA. In 1993, Roy assisted with the start up of the Environmental Affairs Committee which later became the Government Affairs Committee. As the President of HWEA, Roy helped to create two new committees, the Safety Committee and the Research Committee. Roy has also prepared and submitted two EPA grant proposals. One was for the Water Reuse Video Public Outreach Project and the other was for the production of collection system public service announcements.
Roy’s contributions to HWEA over the past years have been considerable and he is always willing to put full effort into the task at hand. For these reasons, Roy is well deserving of the WEF Bedell Award.  Roy received his award from 2001 WEF President Jim Clark and 2000 HWEA President Steve Parabicoli.

The Laboratory Analyst Excellence Award recognizes individuals for outstanding performance, professionalism, and contributions to the water quality analysis profession. Criteria for this award include: 1) employment involving direct analytical responsibilities at an educational, industrial, commercial, or municipal laboratory which performs wastewater related analysis 2) involvement in WEF/HWEA and other professional organizations; 3) outstanding efforts in the area of wastewater and environmental aquatic analyses; 4) involvement in community activities and public relations; 5) presentations at professional conferences, meetings, etc. relevant to water quality analysis; 6) professional certifications; 7) continuing education; 8) contributions beneficial to the nominee’s facility; and 9) unusual initiative or performance “beyond the call of duty.”

The 2000-2001 recipient of the Laboratory Analyst Excellence Award goes to Robert Rychlinski of the County of Maui.  Robert was born in Michigan in 1959 and moved to Hawai‘i when he was young. He graduated from the University of Hawai‘i at Manoa where he received a Bachelor of Arts degree in Zoology. Robert began his employment with the County of Maui as a Lab Technician in 1993. He was promoted to his current position of Sanitary Chemist III in 1995. Besides performing routine sampling and analysis, Robert has taken on responsibilities to improve the quality and accuracy of data obtained from laboratory analysis. He has developed a schedule of ongoing quality control testing of standards for chemical analysis and performs quality control testing on instruments and equipment. His contributions will help the County of Maui’s Central Wastewater Laboratory achieve accreditation and certification.

Robert has been a member of the HWEA Laboratory Committee since it was established in 1996. He has contributed procedures to help formulate the Standard Laboratory Analytical Procedure Manual which will help lab colleagues and wastewater operators with their daily process control. He has also developed a Quality Assurance Manual for Maui County’s Central Wastewater Laboratory and has shared it with members of HWEA’s Laboratory Committee. Robert also contributes his time as a judge in the laboratory event at the HWEA Conference Operator’s Challenge.

Robert routinely volunteers his time to help young intermediate students develop their science projects. He insists that the students learn the correct sampling and testing procedures which lead to accurate and precise data. By doing so, the students better understand the work they have accomplished and they typically continue and expand on their respective projects in subsequent years.

Robert, his wife Jarene and their three year old son Steven, reside in Pukalani. In his spare time, Robert enjoys raising tropical fish and diving. He also is an avid runner and participates in a number of road races such as the Hana Relay, Maui Marathon and the Haleakala Run to the Sun. Robert is also hockey fanatic and is a rabid fan of the Detroit Red Wings.

Robert is a diligent employee and laboratory professional who routinely goes beyond the call of duty while on the job. He is an excellent choice to receive the Laboratory Analyst Excellence Award.  Robert received his award from 2000 HWEA President Steve Parabicoli.