The Bedell Award was established by WEF to acknowledge extraordinary personal service to a member association (i.e., HWEA). Criteria for this award include organizational leadership, administrative service, membership activity, stimulation of technical functions, or similar participation.

The 1999-2000 HWEA recipient of the Bedell Award is James K. Honke of the City and County of Honolulu’s Department of Design and Construction. Jimmy was an officer in HWEA in the early 90’s and served as WEF Director from 1995 – 1998. Jimmy was also honored to serve on the WEF Executive Committee from 1998-1999. Jimmy was a frequent traveler to WEF meetings and did an outstanding job of keeping the HWEA Board of Directors and Committee Chairs up to date on WEF business. Jimmy also wrote a paper on the positive effects that the Clean Water Act had on the environment in Hawai‘i. Check it out by clicking here.

Jimmy graduated from the Massachusetts Institute of Technology where he majored in Mechanical Engineering and has worked at the City and County of Honolulu for 20 years. As both a consultant and City and County employee, he was influential in implementing projects such as the 301(h) waiver for the Sand Island and Honouliuli Wastewater Treatment Plants and improvements to the Kailua Wastewater Treatment Plant.  Jimmy and his wife, Karen have a son and a daughter and now are the proud grandparents of three grandchildren.
Much mahalos to Jimmy for all of his years of dedicated service to HWEA and the Water Environment Federation!  Click on the thumbnail image to see Jimmy receiving his award from 2000 WEF President Al Goodman at the HWEA conference banquet.

The Hatfield Award is presented to operators of wastewater treatment plants for outstanding performance and professionalism. Criteria for this award include: 1) preparation of reports that fulfill the information requirements of his or her superiors and provide useful suggestions for facility and operational improvements; 2) promotion of good public relations with the community; and 3) involvement in dissemination of information concerning advancements in the field. 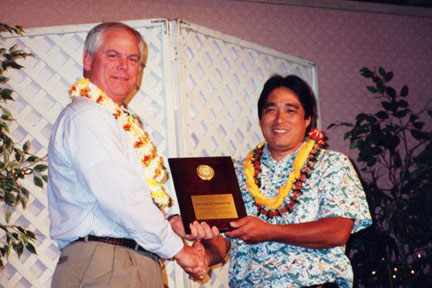 The 1999-2000 recipient of the Hatfield Award is Guy Moriguchiof Aqua Engineers of Kaua‘i. Guy earned an Associates Degree in Automotive Mechanics from Kaua‘i Community College and shortly after started his career in water quality as a Wastewater Treatment Plant Operator for the County of Kaua‘i’s Wastewater Management Division in 1980. Guy worked for Kaua‘i County until 1994 and then took up employment with Aqua Engineers where he is currently employed as a Team Leader.  Guy not only is responsible for operations and management for two wastewater treatment plants but is also responsible for a drinking water system in South Kaua‘i. He is currently certified as a Grade 4 Wastewater Treatment Plant Operator, a Grade 2 Water Treatment Plant Operator and holds a Grade 1 Water Distribution license.

Guy has been active in HWEA, previously serving as the PWO Representative from 1995 to 1998. He has also served as an alternate on the Kaua‘i “Nitrifier” teams which participated in the national Operations Challenge at the annual WEFTEC conferences.  Guy has also been very active over the years in the Kaua‘i Operators Association (KOA).

Guy and his wife Alison are the proud parents of two daughters. Guy is a retired softball player who enjoys playing with cars by taking them apart and putting them back together again.  Hopefully, he doesn’t have any spare parts left over when he is done playing.
Congratulations Guy, and keep up the great work!  Click on the thumbnail image to see Guy receiving his award from 2000 WEF President Al Goodman at the HWEA conference banquet. 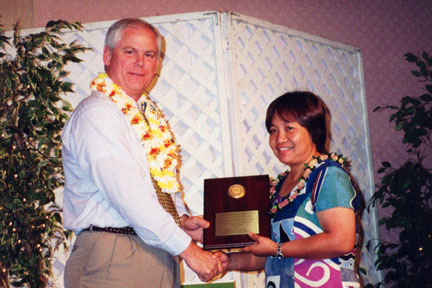 The Laboratory Analyst Excellence Award recognizes individuals for outstanding performance, professionalism, and contributions to the water quality analysis profession. Criteria for this award include: 1) employment involving direct analytical responsibilities at an educational, industrial, commercial, or municipal laboratory which performs wastewater related analysis 2) involvement in WEF/HWEA and other professional organizations; 3) outstanding efforts in the area of wastewater and environmental aquatic analyses; 4) involvement in community activities and public relations; 5) presentations at professional conferences, meetings, etc. relevant to water quality analysis; 6) professional certifications; 7) continuing education; 8) contributions beneficial to the nominee’s facility; and 9) unusual initiative or performance “beyond the call of duty.”

The 1999-2000 recipient of the Laboratory Analyst Excellence Award is Anita E. Fernandez of the County of Maui’s Wastewater Reclamation Division.  Anita earned a Bachelor of Science in Biology from the University of San Francisco.  She was hired as a Chemist by the County of Maui in 1990 and now holds the position of Laboratory Supervisor.  Among the more demanding responsibilities that Anita has includes: 1) Insuring that Maui County conducts seven day per week fecal coliform analysis on its reclaimed water to be in compliance with the State Department of Health’s water reuse guidelines, 2) Effluent nutrient testing to meet EPA requirements and to aid operators in process control, and 3) Participating in a split sample microbiology program to insure quality control at her laboratory.

Anita has been an active member of the HWEA Laboratory Committee since 1994 and currently serves as the committee’s Vice Chair.

Anita is married with two children and is considered an avid baseball fan as she is often seen supporting her husband’s softball team and her son’s baseball team (She actually belted a pinch hit triple for the Maui Turd Busters at last year’s PWO Softball Tournament on the Big Island!).  Anita also enjoys playing golf and hopes one day to be on the LPGA Tour (Laboratory Professional’s Golf Association).

Congratulations Anita on a job well done!  Click on the thumbnail image to see Anita receiving her award from 2000 WEF President Al Goodman at the HWEA conference banquet.